Twenty years ago in Zimbabwe ~ 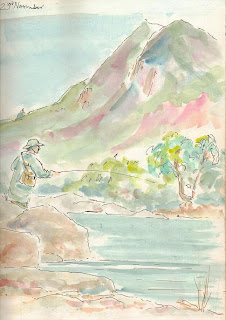 ~ Fishing on the Pungwe River ~

A short extract from 'Ride the Wings of Morning' ~

"I’m now staying with an artist in the Nyanga Highlands, a girl who is married to a British Army officer out here with BMATT who provide military training for the Zimbabwean Forces. They spend their spare time fishing in the  picnicking on gigantic granite boulders while their children splash in the shallows. There are parties here all the time, and unlike in , where men talk to men and women with women, they actually interact normally. I am assured this isn’t always so in the local community but Zimbabweans tend to be outgoing and rather fun. I went riding with a farmer’s wife called Pixie. She had one little girl called and another called Summer Rain. They rode their ponies bareback, jumping them over gates and fences without hesitation. I’m heading for Victoria Falls by train next week and after going down the Zambezi plan to fly up to so I can drive up through to the Nyika Plateau.

I didn’t realise how bushed I had become at Equus. I hadn’t taken a day off in four months ~ hadn’t used my own money, watched television, worn anything accept khaki clothes, had hardly driven on a tarmac road or been to a town since I was in the . It’s strange adjusting back to life on the open road and making decisions alone. Being able to wear turquoise. Having time for myself."

~ Read more of 'Ride the Wings of Morning' on Amazon.co.uk

All sketches on the blog are featured in 'Ride the Wings of Morning' and are (c) Sophie Neville. Please contact me if you need to use them on sophie@sophieneville.co.uk
Posted by Sophie Neville at 04:50