Are you planning to go to Cape Town? 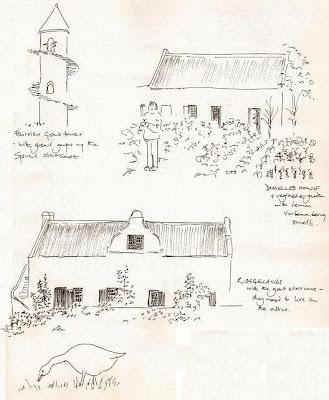 Sketches made travelling through the winelands ~ 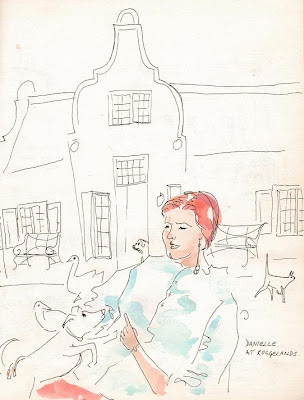 Visiting a friend at Roggelands, near Paarl ~ 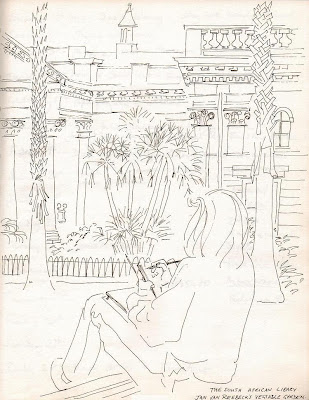 In the old Botantical Gardens looking at the South African Library ~ 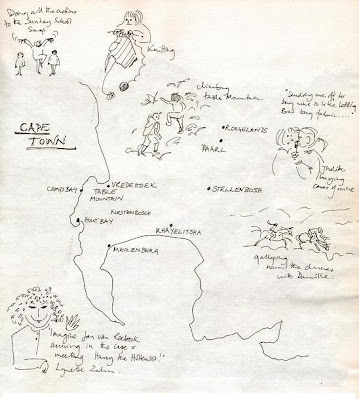 A map I sketched of the Cape Town area ~

Posted by Sophie Neville at 15:16 No comments:


Here is a contemporary take on South African slang ~


I didn't know what Nooit meant until I watched this.

But the twin brothers Jack and Finn made a really good film about their visit to WWS in Vaalwater when the flew to South Africa with Comic Relief.


Posted by Sophie Neville at 07:57 No comments:

A Live Broadcast on USA Radio ~

Sophie Neville was on 'Second Chance Radio Show' in the USA

Sophie spoke about her books and her life in Africa.

Free Kindle copies of 'Ride the Wings of Morning' were offered on the programme.

Posted by Sophie Neville at 05:16 No comments:

Jack and Finn visit the Waterberg ~


Jack and Finn recently visited the Waterberg Welfare Society in Vaalwater, the project we set up in 2000 to help the people of the Waterberg cope with the pandemic HIV/AIDs.

I wonder what road signs impacted them as they drove up!

Do post any questions in the comments below ~
Posted by Sophie Neville at 06:40 No comments: 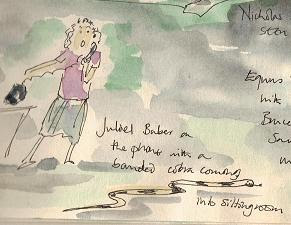 My friend Juliet was on the phone when a banded cobra slid through the French windows and straight past her into the sitting room. Her brother rushed in with a gun and shot the snake, just missing his mother's china cabinet. It measured 5'7" long and potentially very dangerous. But where was it's mate?

Another night one of the horses decided to cross a cattle grid. He got stucker than stuck. Three of his legs were between the bars. The Government vet told us we would never get him out uninjured and that the only answer was to shoot him. We managed to help by sliding bed boards - great slabs of wood - either side of the little horse before pulling out his hooves with ropes. He finally struggled to his feet a bit bruised and shaken but with no damage done apart from an injury to his pride.

Do add your own stories of life in the bush in the comments below ~
Posted by Sophie Neville at 09:29 No comments:

We are extending the offer!
Please help yourself to a free e-copy of
'Ride the Wings of Morning'
on Saturday 23rd and Sunday 24th March

A conventional English girl arrived in South Africa, to help a friend run horseback safaris on a game reserve in the Northern Transvaal. It was 1992.

There were yellow road signs declaring “Dit is die Volkstaat”.

Sophie had heard of “biltong” but knew nothing of Afrikaans culture. She was aware of poachers, but not of the danger of sausage trees. Nor how to cook a gemsquash on the campfire without causing an explosion. She understood there were rhino on the reserve, but not that she would end up working as the safari guide. In the dark. On a stallion. Lost. With completely innocent tourists on other horses.

This upbeat true story, the sequel to her book ‘Funnily Enough’, is told through correspondence sent back and forth between Sophie Neville and her family in England.

Armed only with a paintbrush, she set off on various adventures into the wilderness, to illustrate the beauty, diversity and warmth of the great continent.

Posted by Sophie Neville at 14:17 No comments: