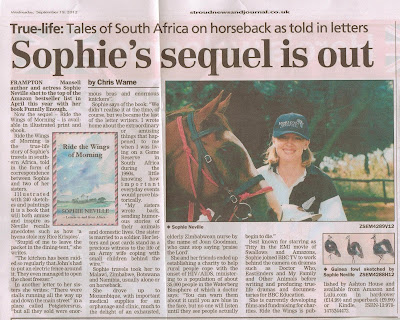 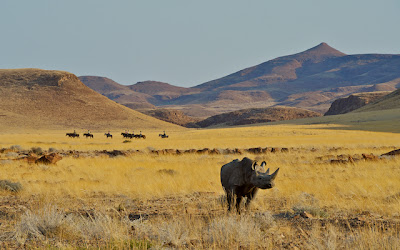 Of all the amazing things it is possible to do on this planet, riding with rhino has to be one of the most exciting. Marnie Steffny has just written with news of the recent sightings that Sarah-Jane has been having in Namibia.


“We couldn’t believe our luck.  Out on the rocky plains of Damaraland stood the most endangered of Africa’s Big Five, ears flicking and head raised in typical short-sighted stance.  SJ’s daughter, Zoe, 11, was the first to spot it.  At a safe distance, we sat quietly on our horses, ready to gallop away in an instant.  SJ speaks softly about why this is such an incredible sight.  “Each time we do this ride we find their tracks.  To see a black rhino anywhere is a huge achievement, but to do so on horseback is something that few will ever experience.”  As the sheer enormity of our good fortune sinks in, we’re rather glad that our horses are literally taking things in their stride.
"We gave him a wide berth, as black rhinos are unpredictable and very curious, with notoriously bad eyesight.  If we’d needed to gallop out of danger over such rocky ground, the horses would’ve had difficulty – fortunately we had enough distance between us, and both horses and rhino stood their ground.  Then he caught our scent and crashed towards us like an army tank, covering about forty metres in a matter of seconds before calling off the charge.  This individual is usually relaxed in the presence of game viewing vehicles, but a combination of horses and humans would have been new to him." 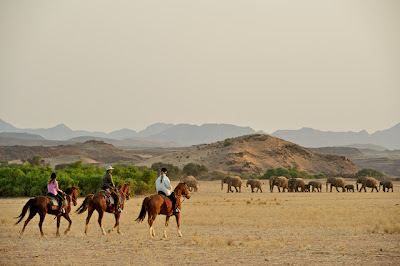 "Another highlight of our ride was an encounter with a herd of elephants as they crossed the plains ahead of us, returning from water to browse.  Young bulls, protective cows, and tiny calves in procession had the tips of our horses’ ears almost touching, and when an elephant spun face-on with a volley of head-shaking, the wind changed direction and carried the scent of the herd towards us.  This proved too much for one mount, who sped off in the opposite direction.  At times like this, it’s absolutely clear why these rides are only suitable for very experienced riders!
"Namibia’s Damaraland region is a unique ecosystem, and supports a staggering variety of desert-adapted creatures, both large and small.  We were fortunate to get to the heart of the action on horseback - and delighted that photographer Torleif Svensson was with us to capture these remarkable images. 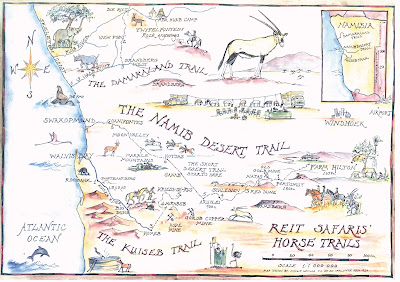 I rode across the Namib Desert some time ago, drawing up this map of the 400 kilometer ride as well as the Damaraland Trail that goes through black rhino country further north. It was here that I once went tracking with Save the Rhino Trust (see previous posting).
Reit Safaris simply means Riding Safaris in German. Sarah-Jane Gullick, who I first worked for as a guide in South Africa twenty years ago, now runs the Namibia Horse Safari Company, leading the most exilerating rides across the vast wilderness areas of south-west Africa. Some rate her rides as the toughest and most challenging in the world. As she says,  'there’s little to beat the freedom and thrill of covering distances at a good gallop.'
To read Marnie's full story please click here

Posted by Sophie Neville at 07:23 No comments: 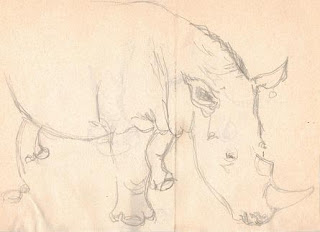 She was called Tracy. Tracy the white rhino. She was wearing an earring when I first met her, quietly grazing on lucerne in a boma constructed of gum poles. I whipped out a pencil and paper and started to draw her. I was working as a safari guide and took any chance I could to take visitors back to see her, encouraging them to draw too. There was a population of fifteen white rhino already in the game reserve where I lived. In the reserve across the river they had black rhino who thrived in the dense bushvelt. I visited them too, sketching away from the back of an open Toyota Landcruiser. The warden's wife adopted and brought-up an abandoned baby black rhino she called Bwana who we fed with milk from a huge Cola Cola bottle. His saliva made out finger-nails become coarse and ridged. 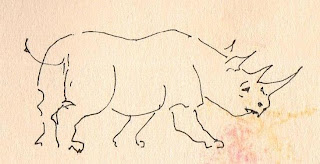 In the mid 1990s I set up a wildlife serial called 'Dawn to Dusk' for the BBC Natural History Unit. I decided that it would be good to dedicate one episode to the work of Save the Rhino Trust in Namibia. 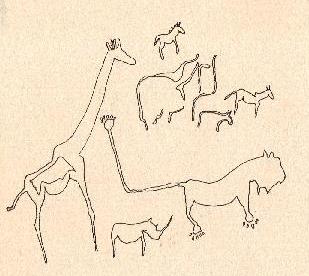 These are my sketches of some of the 2,500 ancient rock engravings made by Stone-age hunter-gatheres in the Kunene Region of Namibia about 6,000 years ago. 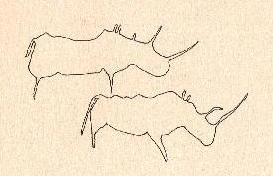 I had time to quickly draw copies of these remarkable bushmen engravings at Twyfelfontein when I was on the BBC recce but didn't manage to do more than take photographs when I was tracking with the game scouts. At one point we were charged by a cow - a rhino cow - called Rita. It was all I could do to hang onto my nerves whilst scrabbling up a tree. 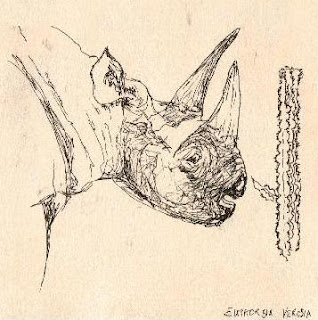 Blythe Loutit, the Director of Save the Rhino Trust kindly invited me back a year later to take part in a rhino census. It was then that I was able to sketch the rare black rhino of Damaraland as well as the elephant roaming the desert. I was also able to use the unique wealth of ID photographs that the scouts had collected and filed. 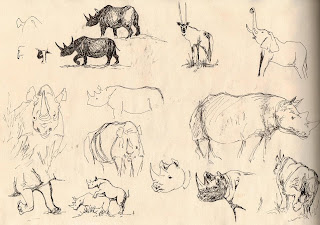 Some of the rhinos had developed the most amazing shaped horns. 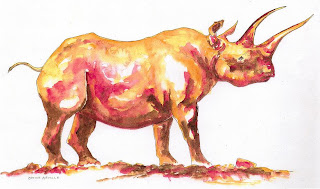 I translated my smaller ink drawings into silhouettes that the Rhino Trust could use for graphics.

This ink and watercolour sketch was drawn from one of Blythe Loutit's photographs. I executed a similar one in a grey platee which was auctioned at Phillips of Bond Street to raise funds for the charity Rhino Rescue.  It isn't brilliant but they entitled it 'Rhino's Bottoms and it brought a bit of laughter to the auction room. 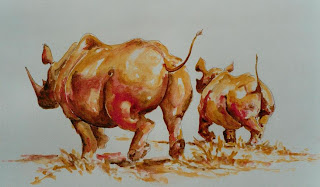 This ink drawing of a white rhino was part of a set made into grettings cards sold in aid of The Born Free Foundation. As you can see they have a confirmation not unlike that of a horse ~ quite different from elephant who have four knees. They operate their pig-like ears independently, as shown here, rotating them like RADAR receivers, listening out for poachers. 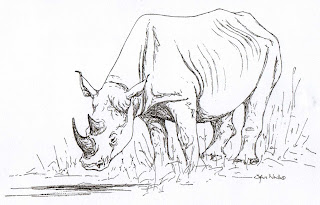 If you need graphics of rhinos for any reason - let me know. I have a huge amount of drawings that have never been used. 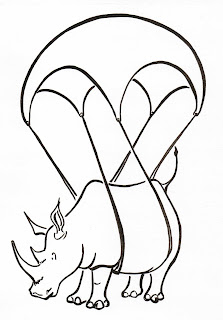 All sketches on the blog are featured in 'Ride the Wings of Morning' and are (c) Sophie Neville. Please contact me if you need to use them on sophie@sophieneville.co.uk
Posted by Sophie Neville at 11:27 No comments: